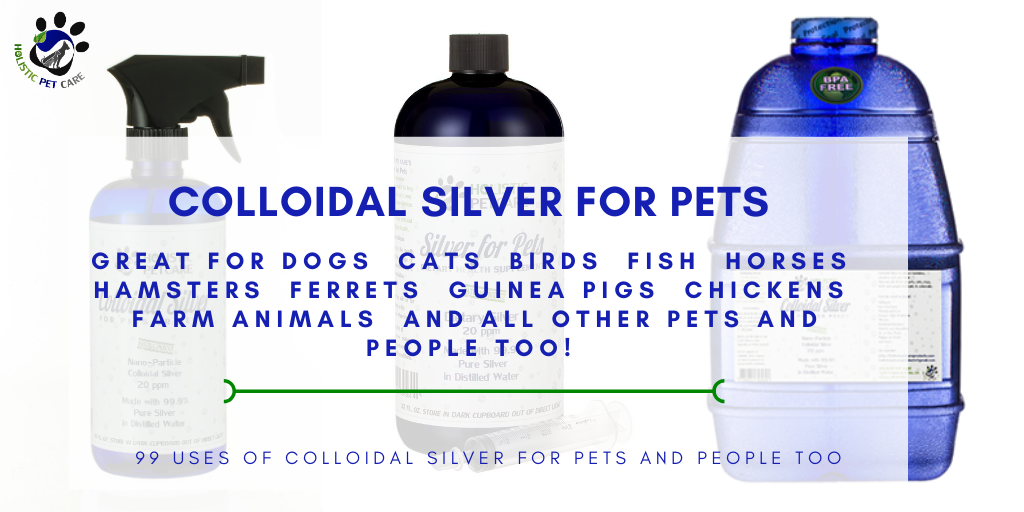 There is not an exact dosage of colloidal silver. Below are some guidelines for amounts to give for treating some kind of health condition- however, colloidal silver is not dose specific as some other information I have seen on the internet seems to make you think it is. When your pet is dealing with an acute condition they can have much higher doses of the silver for short term for helping to cure something specific with no ill effects.
Small Dogs, Cats:
Medium Size Dogs:
Large Size Dogs:

For people I recommend for maintenance use an ounce two times a day. I take it after brushing my teeth. About an ounce in my mouth after brushing. Swish around for a minute or two and then shallow.

Some people or with your pets, when first ingesting Colloidal Silver, have the experience that is called the Herxheimer effect.

Sometimes a person who ingests Colloidal Silver for the first time will experience what feels like a cold or the flu (or diarrhea). This can be stopped by cutting back on the dosage (or completely abstaining for a day or so), or prevented by starting with a small dose ( maybe start with 1 teaspoon twice a day) and gradually increasing the dosage.

Some people even find they need to start off at first with just a few drops. People who are trying to self-treat a significant health condition (like asthma, or an internal infection) may need to work up to fairly large quantities each day (4 to 6 oz 2-3 times per day) before they see an improvement. There are no known instances of anyone overdosing with clear Colloidal Silver.

Yes, colloidal silver has many, many other uses that will allow you to safely and effectively protect yourself and your family from infectious microorganisms and disease.
Indeed, there’s no other all-natural antimicrobial substance on the face of the earth that can compare to it.

It has already been well established that the metal, silver, that you make jewelry out of, has a somewhat unique property: It kills nearly all pathogens on contact.

We say, “nearly all” because it doesn’t kill absolutely every single pathogen. There are 5 or 6 bacteria that are not only not killed by silver, they LIKE silver, they EAT it. You will see some of these bacteria, for example, involved in the tarnish that accrues on the surface of silverware or silver jewelry (along with oxidation). But none of these bacteria hurt human beings.

There are also some fungi that silver does not readily kill. I have read claims that silver only kills “unfriendly” bacteria and not “friendly” bacteria, but this is not true. Try to make yogurt with milk into which you have poured colloidal silver! It won’t work, because the silver killed the “friendly” acidophilus bacteria. Besides, the labels of “friendly” and “unfriendly” are defined by these pathogens being convenient or inconvenient to us humans.
We have heard that there have been references found in ancient Chinese writings of it being recommended by a Chinese health practitioner that a piece of silver jewelry be pressed against an infected wound to fight the infection.

It is generally believed that the Royal Families in Europe would mechanically grind up silver into a powder and stir it into wine or water and drink it to protect against sickness. Obviously, they wouldn’t have known about germs and viruses, but they would have noticed that those who drank this silver-powder didn’t get sick as often as the non-Royalty common folks (who couldn’t afford to drink silver-powder).

This in addition to the fact that they ate off silver plates, drank from silver cups and ate with genuine "silverware".

So, let us start at a basic beginning. If you put silver of any type, form or shape into the presence of and in contact with almost any kind of pathogens, the silver will kill them to one degree or another.

At today’s prices, grinding up silver and drinking it would be quite expensive. So, nowadays, we dissolve silver using electricity, which makes the silver particles quite small. It’s possible to break up silver by dissolving it in an acid, but the acid residue is not considered to be a healthy substance, and the silver particles are very unstable, falling out of suspension easily.
We recently completed an extensive review of the scientific literature on the safety of silver, especially as it relates to its one known potential side effect, namely, Argyria.

Our note on ‘Argyria’ or turning blue from Colloidal Silver use:

Argyria is an irreversible discoloration of the pigment (skin) caused by excessive silver intake or chronic exposure to silver by certain tissues. The amount of silver required to develop Argyria is estimated to be 3.8 grams per day. By comparison standard 10 ppm colloidal silver contains silver in amounts equaling less than 1 milligram of silver (1,000 micrograms = 1 milligram; 1,000 milligrams - 1 gram), which therefore represents an amount approximately 1/500th to 1/1000th of the amount of silver considered to be a risk in the development of Argyria.

We could not locate a single case of orally consumed colloidal silver manufactured in the last 25 years causing Argyria in our review of the literature.” Alexander G. Schauss, Ph.D. Director, Life Sciences Division John Hopkins University [From the article, “The Final Word on Silver Toxicity”, from Metabolic Solutions Institute]

Nanosilver is considered to be more effective than colloidal silver because the silver particles are small enough to pass through the walls of the body’s cells (what Dr. Demling calls “metastable”), enabling it to get to the places viruses like to hide. Colloidal silver particles are too large to do that. The strength of a silver preparation is measured in what is termed, “ppm”, which stands for “parts-per-million”. Now, you would get the impression that ppm stood for parts of one thing in proportion to parts of another thing, but that is not correct. In the scientific world, the term, “parts-per-million”, actually represents a ratio of one thing to another, not the number of parts. You could have one lump of silver at the bottom of a container of water and still have 40 ppm. It is not a unit measurement, it is a ratio measurement.

When brewing colloidal or nanosilver, there is a limit to how much silver can be dissolved into a quantity of water before it reaches a certain saturation point. After this point, the silver particles begin to aggregate together because the water is saturated with silver particles. Although there is disagreement on exactly when this point is reached, it is generally considered to be at about 20-30 ppm.

How to use the world's most powerful all-natural anti-bacterial, anti-fungal and anti-viral disinfectant to keep your family safe and infection-free at home
Use it for all your pets in their drinking water ( 2 -3 t daily) for regular immune boosting maintenance

Whenever someone in your household has a cold or flu, it’s definitely prudent to use a good, liquid antimicrobial soap as a topical disinfectant whenever you wash your hands, and then add an antimicrobial gel to your hands after washing them, for added protection throughout the day.

Because as the experts are constantly pointing out, hand-to-hand spread of viruses and germs are the most common route of infection. So washing with liquid antimicrobial soap, and afterwards adding a good antimicrobial gel to your hands will give you some serious protection when you’re around anyone who is sickly. Instead of using chemical antimicrobial soap- just get a good organic or natural liquid soap in a pump dispenser bottle and add colloidal silver.
I like to purchase organic soaps that come in a pump dispenser bottle, because you can easily remove the lid, add an ounce or two colloidal silver (about two tablespoons per each four ounces of soap), then put the lid back on and shake it well until the colloidal silver is thoroughly mixed into the soap. This adds some serious antimicrobial fire-power to your organic soap. I do the same with dish soap.
Topical Gels With Colloidal Silver
You can make a colloidal silver gel. Mix half and half with a good aloe vera gel. You can use on cuts scrapes etc. or just rub the gel onto your hands for a nice disinfectant gel. You have the added protection of silver for hours on end to help stop viruses and bacteria from living on your hands and being spread by touch to your eyes, ears, nose or mouth. In short, by using a good silver-based topical disinfectant gel at least several times a day (three or four times a day is preferable), you can dramatically decrease the spread of pathogens in your household, or at work. You protect yourself, and everyone around you, if you are concerned about spreading germs for any reason.