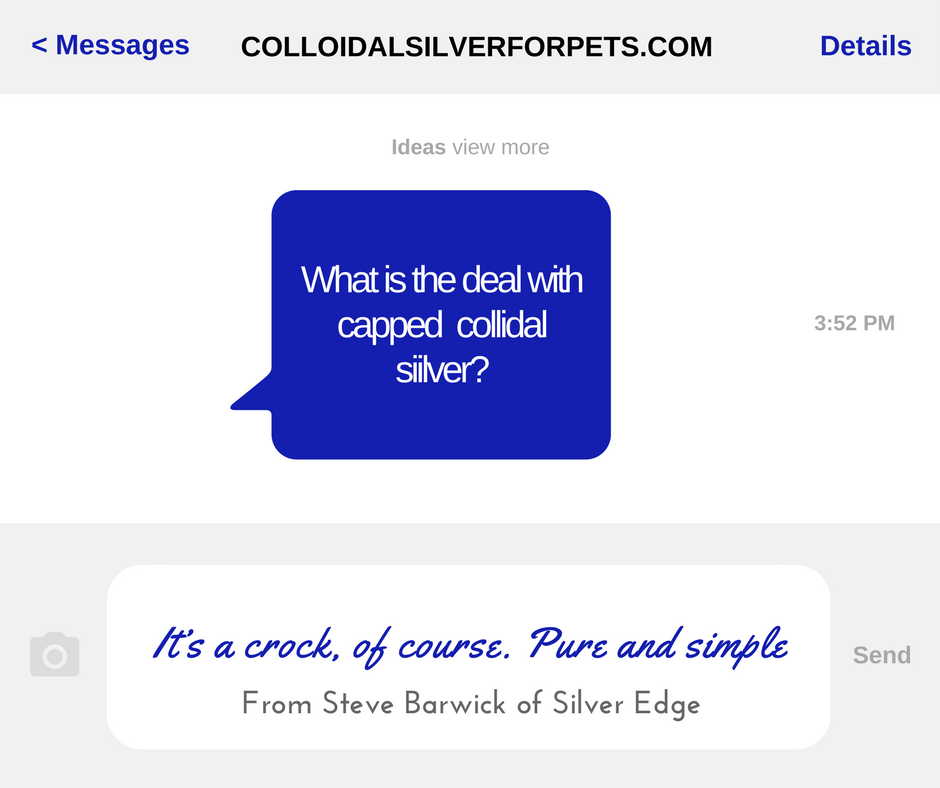 A Silly Colloidal Silver Fad You Might Want to Avoid (Opinion)

(This is great info about why not to use this colored, capped CS)

FYI- Long post but if you have been wondering about which type of colloidal silver to use.

There seems to be no end to colloidal silver fads.

It’s a crock, of course. Pure and simple. And below, I’ll explain precisely why you might want to avoid this silly little fad altogether, and why pure, unadulterated ionic colloidal silver is the absolute best way to go if you’re going to ingest colloidal silver for any reason.

Here’s the straight scoop you won’t find anywhere else...

One new colloidal silver fad that’s being hyped all over the internet in articles and YouTube videos is what I call the “corn syrup and washing soda fad.”

In this silly fad, you use a use a colloidal silver generator to make the ionic form of colloidal silver. But you add the ash of baking soda (i.e., “washing soda”) to the water as an accelerant.

After you’re done making your batch of washing soda and ionic silver, you then add Karo syrup (corn syrup) and heat up the mixture in a microwave oven in order to trigger it to turn golden brown in color. Alternatively, you can leave the batch setting out for 24 hours until it turns golden brown on its own.

This long, drawn-out and fairly complex process ostensibly allows you to “reduce” ionic silver into what’s being touted as the “superior” metallic form of colloidal silver, which the purveyors of this nonsense erroneously call “true colloidal silver.”

Of course, this is one of the absolute silliest colloidal silver fads I’ve ever seen. First of all, it’s critical to understand that there’s no such thing as “true colloidal silver.” It’s a made-up marketing term. You won’t find it anywhere in the medical, clinical or scientific literature, because it’s a completely fabricated term.

The correct term is simply “metallic silver” or “elemental silver,” because that’s all it is, i.e., particles of raw metal silver.

To better understand why it’s so ludicrous to turn perfectly good ionic silver into metallic silver before ingesting it, let’s go back to the basics for just a minute:

The silver ion -- which is to say, ionic silver -- is the active, infection-fighting form of colloidal silver. All true clinical experts agree that it’s the silver ion that kills pathogens. But don’t just take my word for it. For thorough documentation, see this article:

Experts: It’s the Silver Ion That Gives Colloidal Silver Its Antimicrobial Qualities
In spite of the fact that ionic silver is clearly and unequivocally the active, infection-fighting form of colloidal silver, what these Karo syrup kooks are saying to do is take your perfectly good ionic silver and use chemical means (i.e., washing soda, Karo syrup and heat) in order to convert the ionic silver into metallic silver before ingesting it.

The problem with doing this is simple: Even if it worked -- which it probably doesn’t, as I’ll show you shortly -- metallic silver is nevertheless completely inert against pathogens. Indeed, metallic silver has zero infection-fighting qualities.

Again, if you don’t believe me, see the following two articles for complete documentation:

Your body then has to go through a long, slow and haphazard process of converting the metallic silver BACK into the ionic form in order for it to kill pathogens. And this can only happen when some of the metal particles of silver you’ve ingested come into contact with oxygen and acidic fluids inside your body, and begin to shed silver ions.

In short, by drinking this homemade “metallic” silver concoction, you’re simply adding an unnecessary burden to the body -- i.e., your body has to gradually convert the metal silver particles you’ve ingested back into biologically-active and biologically-available silver ions.

Of course, this long, slow and thoroughly arduous conversion process inside the human body dramatically slows the killing of pathogens, and thereby delays healing.

After all, studies have shown that the ionic form of colloidal silver, by itself, is up to 10,000 times more effective than the elemental/metallic form. And that’s largely due to the conversion issue I just explained. For documentation, see:

Study Shows Ionic Silver Is Up to 10,000 Times More Effective than “True Colloidal Silver”!
And for a fully detailed overview on the profound healing differences between the superior ionic form of colloidal silver and the inferior elemental (metallic) form, see this web page:

Finally, there’s some additional controversy over this silly fad that I think is important to note:

Many chemistry experts say that the only thing being produced during the first step of the process (when you add washing soda to your water before making colloidal silver with it) is an ionic silver compound composed of silver ions bonded to soda ash, the result of which is silver carbonate, not "colloidal silver."

And this silver carbonate compound, when heated as instructed along with the added corn syrup, is then further converted into a silver carbonate and corn syrup compound. In essence, you’re giving your colloidal silver a candy coating, much like caramelizing an apple.

Instead of ending up with metallic silver as the purveyors of this fad claim, you actually end up with nothing more than a silver-carbonate-corn-sugar compound that turns golden brown because the resulting silver particles are so large they act like “mirrors” in the water, reflecting and diffusing light from the visible light spectrum.

Yes, it’s these overly-large silver particle compounds that discolor the water, giving it the golden brown appearance that the purveyors of this fad claim is “proof” you’re making “true colloidal silver.”

This discoloration, of course, is a detriment, and not a benefit.

That’s because, whenever your silver particles are so large they can actually reflect and diffuse enough light from the visible light spectrum to discolor the water, it’s going to be extremely difficult for your body to absorb, distribute, utilize and afterwards excrete those excessively large silver particle compounds.

Finally, it’s important to understand that a good, high-quality ionic colloidal silver suspension will always be crystal clear in color. That’s because silver ions are so small they can’t reflect and diffuse light. It’s their extremely small size that makes them very easy for the body to absorb, distribute, utilize and afterwards excrete.

So if you’re getting yellow or golden-colored colloidal silver, you’re producing overly-large silver particle compounds and/or agglomerates that are reflecting light from the visible light spectrum, which in turn discolors your batch of colloidal silver.

All you can do sometimes is just shake your head at the utter ridiculousness of some of these fads. The people touting them don’t even seem to think them through. They apparently just want to draw attention to themselves by coming up with something “new” and “different” regardless of how silly it actually is upon closer examination.

And then people by the thousands unwittingly pass the articles or videos around the internet thinking they’re providing their online friends with the latest inside information, when in reality it’s just a colloidal silver version of “fake news.”

The bottom line is that high-quality colloidal silver can only be made correctly with pure silver electrodes suspended in distilled water.

That’s pure unadulterated ionic colloidal silver – the active, infection-fighting form. It’s the most popular form of colloidal silver in the world today – and has been for over 60 years – for the simple reason that it works best.

NO additives or other adulterants or accelerants should ever be introduced during or after the colloidal silver-making process.

That’s because the electrical current running through the silver electrodes, along with the positive electrical charge on each silver ion, will cause the silver ions to chemically react with the additives and produce overly-large silver compounds and silver particle agglomerates.

And again, let me repeat what should at this point be very obvious to you:

It’s like trying to eat dirt in order to get your daily minerals. It will do you no good whatsoever, because the human body is not equipped to absorb and utilize elemental minerals. It chiefly absorbs and utilizes ionic minerals.

That’s why, for the past 60 years, people have used the ionic form of colloidal silver and not the chemically-produced metallic form. Nature’s way is almost always the best way. It’s when man starts hankying around with nature that things go sideways. And this “colloidal silver, washing soda and corn syrup” fad is a great example of that, in my opinion.

The late night television comedian Craig Ferguson used to read ridiculous things off the internet, and when his audience would laugh at what he'd just read, he'd look at them incredulously and say, "Well, it must be true...it's on the internet!"

Of course, he was making fun of the fact that there’s all kinds of nonsense on the internet, and just because something appears online doesn't make it true.

The "colloidal silver, karo syrup and washing soda" combination is one of the cases where I'd have to agree with Mr. Ferguson, i.e., just because somebody took the time to write an article about it or do a video, doesn't necessarily make it true.

And in that time I've seen many, many colloidal silver fads and strange claims being touted by alleged colloidal silver “experts” who seem to come out of the blue. We’ll cover six or eight more of these silly in a future article. So stay tuned.

But just like fad diets which come and go, in like manner colloidal silver fads come into style and go back out of style again, just in time for the next big fad to come along.

What these fads all seem to have in common, to me anyway, is that they usually can’t live up to their own hyped-up claims when you examine the details in light of science and common sense. In my opinion, this is certainly one of those cases.
( From Steve Barwicks Page)